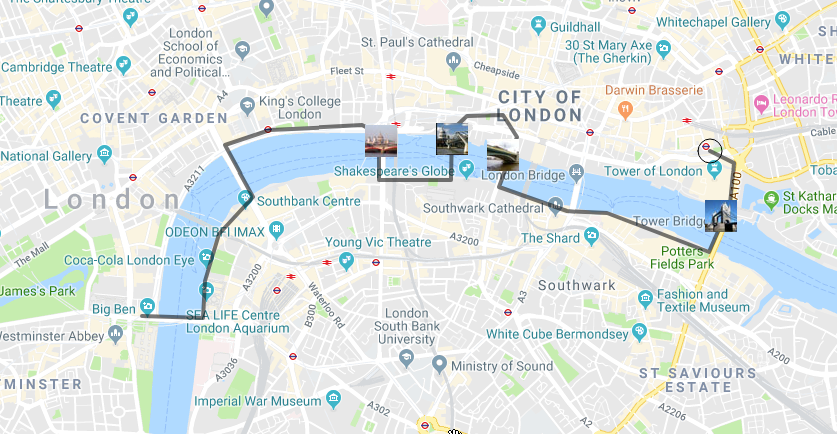 That’s what we did on Sunday 26th May for our annual sponsored walk. This is one of our 50th Anniversary events this year. 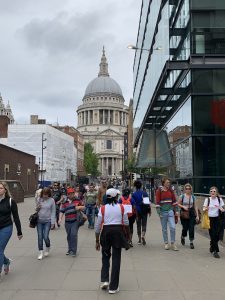 We walked from Westminster Bridge to Tower Bridge, stopping for one break just before the millennium bridge. This walk covered both sides of the river Thames, crossing Waterloo, Blackfriars, Southwark and finally Tower Bridge.  We met up with another member and her daughter at Victoria Tower Gardens, Westminster for a well earned bring and share picnic.   Proceeds going to Jamaica Moves UK, each Walker paid £10 which provided them with a t-shirt supplied by Jamaica Moves UK, Adopt a clinic and Ellen Pearl Outreach Children’s Charity.

We started at 11.45am from Westminster Tube Station and walked across our first bridge.

The walk organiser who has chosen route didn’t realise that this walk would actually involve us crossing several bridges. A few walkers were uncomfortable about walking across bridges especially the Millennium (previously the ‘wobbly’ bridge) it didn’t bode well on the day because several men were repairing one side of it. I told the organiser to focus on St Paul’s straight ahead and not look left or right but she got more and more anxious and sped across very quickly.

Several of us have never seen Tower Bridge open which it did as we approached it because a replica steam paddle type boat called the Dixie Queen was the reason it was opened and again the organiser wasn’t sure about crossing this last bridge. Walking across few of us were again anxious especially as the traffic driving across would make a thump noise as they approached and drove over the section of the bridge which opens! We completed the walk in 3 hours finishing at 3.00pm and took the tube from Tower Hill back to Westminster.

THANKS TO EVERYONE THAT SUPPORTED OUR SPONSORED WALK. WE RAISED OVER £500 FOR THE EVENT.

I’m fundraising for Pancreatic Cancer UK On Saturday 17th July, one of the co-Chairs of LVC Angela Newby, is taking part in a sponsored walk. This event is being undertaken in memory of an ex-work Read more…